When my good friend, Marcia DePalma, owner of Laurel Run Cooking School in Vermilion, asked me to conduct a class at her school, I eagerly said yes. She knows I love to bake, so the class I created revolved around my love of dazzling desserts. I called it, appropriately enough, "Chocolate Showstopper Desserts." (Kinda makes your mouth water, doesn't it?)

Anyway, the class ended up being canceled due to low enrollment. (Now this kinda makes me shake my head. Aren't there millions, perhaps even zillions, of chocolate lovers out there?!) But before you start feeling sorry for me, this dynamic woman who had been one of the few to originally sign up called Marcia and asked if she would offer my class to her women's church group as a private lesson. Of course Marcia said yes. Of course I said yes too (again). And of course the class went on -- as scheduled!

On the Monday after a whirlwind Thanksgiving weekend, I geared up for this class by arriving at the school by noon (even though the class didn't start until 6:30pm). I got to work right away (as in, not a minute to spare). I prepped. Measured. Stirred. Whisked. Folded. Whipped. Poured. Baked. Baked. And baked some more.

You see, I wanted to have several desserts ready to serve while also doing a live demonstration on each dessert during the class. Now that's a lot of baking!

Three helpers showed up a few hours later. We all kept busy...until it was showtime.

Eighteen lovely, lively ladies showed up. In fact, one sweet thing said she had already attended one of my previous classes at Solari's (read all about it here) and really enjoyed it. Kiddingly, she added, "Now don't think I'm stalking you!" On the contrary, I took it as quite a compliment. 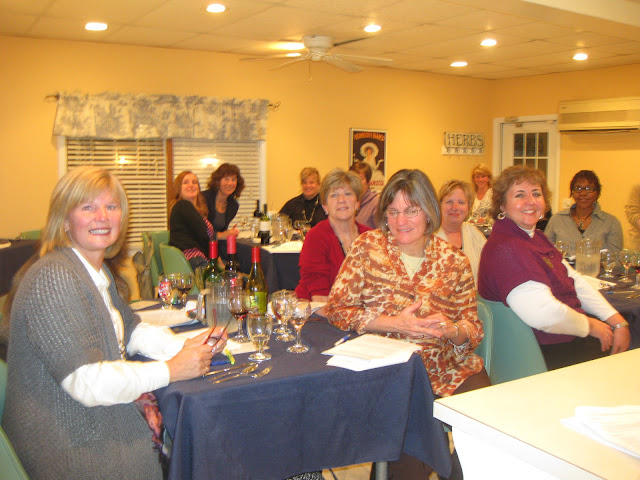 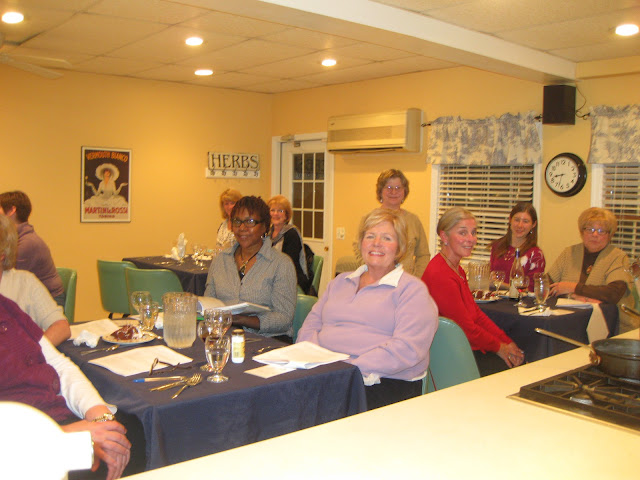 So I got to work on my first dessert, a Black Forest Kirsch-Soaked Cherry Torte (my oldest daughter's personal all-time favorite). It was a big hit with the ladies, if I say so myself.


The second dessert I made (a Chocolate Truffle Decadence with Raspberry & Orange Coulis Duo) also wow'd the audience!

Then disaster struck. My third dessert (a 32-Layer Chocolate Crepe Cake with Hazelnut Cream Filling & Mirrored Glaze) just would not cooperate. Because of our time crunch, we didn't get a chance to chill the batter. As a result, the crepes kept sticking to the pan and falling apart. Marcia came to the rescue with her own traditional crepe recipe, which turned out fine after all. The saving grace, though, were the candied hazelnut garnishes. They turned out marvelous, and all the ladies ooh'd and ahh'd these beautiful creatures!


Then there was yet another fiasco. I was supposed to make my Chocolate Fantasy Sack with Grand Marnier Lava Cream & Medley of Fresh Fruits. But one thing went wrong after another. We didn't brush enough melted chocolate on the bags. We didn't chill them enough. The kitchen was really warm. And we couldn't peel the bags off easily. So we did what any crackerjack team would do: we improvised. Here's the result:


Although the ladies were all sugared out by this time, they seemed happy and impressed. I even got applause at the end of the class. My job was done...and I'll be forever grateful I didn't let them see me sweat (at least I hope I didn't)!

Thank you, ladies, for being so kind. For clapping and taking pictures when things went right. And for not booing me when things went wrong. You were a gracious bunch, and I hope you'll be able to recreate some of these delicacies on your own someday soon (without the bloopers, of course).