The Merriest of Merriest!

The cards are mailed. The gifts are wrapped. The tree is decorated. 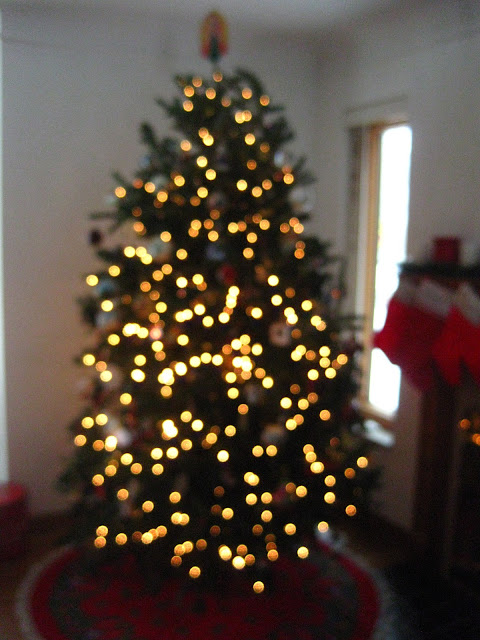 The menu is also all set for Christmas dinner. (Hint, hint: It's John D'Amico's feature in my book!)

Plus the desserts are all done, including a wonderfully drenched Chocolate Rum Cake for my husband's birthday (which was on the 23rd)... 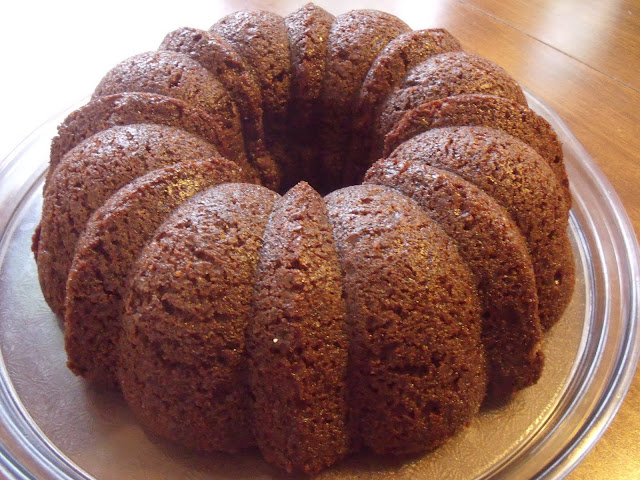 And for Christmas dessert, a 15-Layer Crepe Cake with Orange Diplomat Cream... 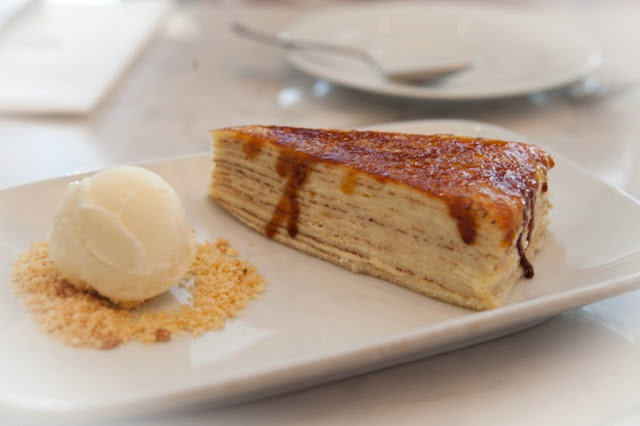 As well as a modern Buche de Noel! 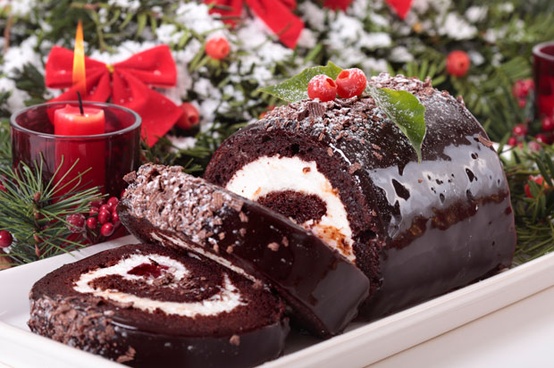 But the absolute best and most important part of all is going to be... 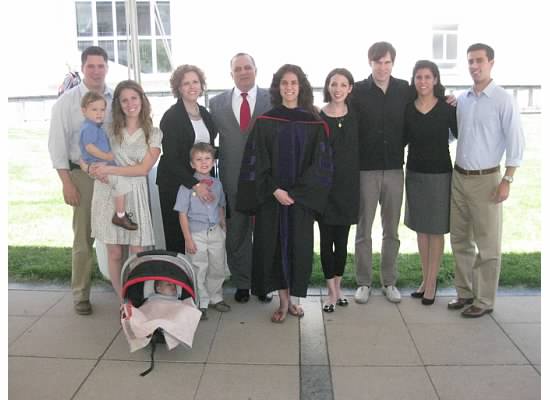 ...being together with every single one of our beautiful children and precious grandchildren on Christmas Day. There is truly no greater gift than this.

Wishing you and your loved ones the most blessed and joyful Christmas ever!
Posted by Maria Isabella at 9:53 AM No comments:

Eight slices of bacon are coming to a crisp in Maria Isabella’s west side Cleveland kitchen.
She says the beauty of this particular appetizer is that it is sweet and salty.
“So many different textures as well. In the end you’ll see that the French bread is crispy. You’ve got the creaminess of the brie, the saltiness of the bacon, and the sweetness in the preserves.”

This recipe comes from Nolan Konkoski   of SOHO Kitchen and bar. It’s something quick and easy that she watched him make at home.
That’s the concept of her book published by Kent State University Press, entitled “In the Kitchen with Cleveland’s Favorite Chefs.”

She wanted to learn how they entertain their own last-minute guests at home in one hour or less.”
Maria Isabella is a personal friend of Cleveland’s most famous chef, and Michael Symon provided entrée to the homes of many others.

She persuaded 35, including Zach Bruell, Jonathon Sawyer and Loretta Paganini, to let her watch them whip up something quickly for themselves and their families.
Like Pete Joyce of Crop Bistro.
“When I asked him what he would prepare for his own last-minute guests in an hour or less he went to his refrigerator, saw what he had in there and came up with his own dish. It does not necessarily have to be anything technically difficult. It’s what their family enjoys. Perhaps what they enjoyed as a child. Not necessarily haute cuisine.”
A copywriter who always wanted to write her own book, Isabella grew up on ethnic cuisine.
“My mother came here from Italy and my father from Serbia. Cooking from scratch was always important in my family.”

She hopes reading recipes and tips from their favorite chefs will inspire her target audience:  foodies …pressed for time, and money:
“They are watching food shows.  They are improving their own skills. They used to eat out much more often so they expect a higher level of meal.”
In at least one case she was amazed by how quickly a gourmet meal came together.
“John D’Amico from Chez Francois in Vermillion did a very elaborate dinner which is very much in line with what he serves at the restaurant and yet this is what his family enjoys and this is how he loves to entertain his own guests.”
It’s cream of butternut squash and roasted red pepper soup; seared Mediterranean bronzini with verges butter sauce and sautéed fennel; roast duck breast with cherry glace de viande; and potato mousseline; and then madeleines.
Isabella says D’Amico worked non-stop and got it done in less than an hour.
That was her only requirement for the chefs, and her friend Michael Symon almost gave her a hard time about it.
“His is a roasted pork on a bed of pumpkin puree with a cilantro salad. Pumpkin puree? That sounds like it would take a while. Well that was interesting because Michael, originally his recipe was to slow roast it in the oven. And I wrote back to him and I said, ‘Would you allow that we cut it up in chunks and boil it? And he said that would be fine. So we did have to work with some of the chefs to cut down the time.”
Isabella chose her 35 chefs with care. Most who contributed to “In the Kitchen with Cleveland’s Favorite Chefs”  have won either the Zagat  Award or Cleveland Magazine’s Silver Spoon award .
And that’s this week’s Quick Bite. Next week we’ll re-visit Breakneck Acres to see what’s new for small farmers in the new year.

Bacon, Brie,& Peach Toasts from "In the Kitchen with Cleveland’s Favorite Chefs" by Maria Isabella

Recipe by Nolan Konkoski, chef/owner of SOHO Kitchen & Bar
4 Servings (2 per person)
8 slices center-cut bacon½ cup peach preserves
8 (¼-inch-thick) slices French baguette, cut crosswise5 ounces mild Brie cheese (such as D’Affinois), cut into 8 thin pieces, rind removed if desired
1. Preheat the oven to 450 degrees.
2. Sauté the bacon in a skillet over medium-high heat until just beginning to crisp. Transfer to paper towels to drain.
3. Spread 1 tablespoon of the preserves over one of the baguette slices. Top with a piece of bacon, add a piece of Brie, and place on a baking sheet. Repeat with the rest of the baguette slices.
4. Bake for about 4 minutes, or until the Brie begins to melt and the bread is just toasted. Serve warm.
Posted by Maria Isabella at 8:55 AM 1 comment:

Limoncello in the Making

There's a common saying in America that goes something like this: When life hands you lemons, you make lemonade.

But if you're Italian, that saying would more likely go like this: When life hands you lemons, you make limoncello!

Which is exactly what we're doing at our house this week. 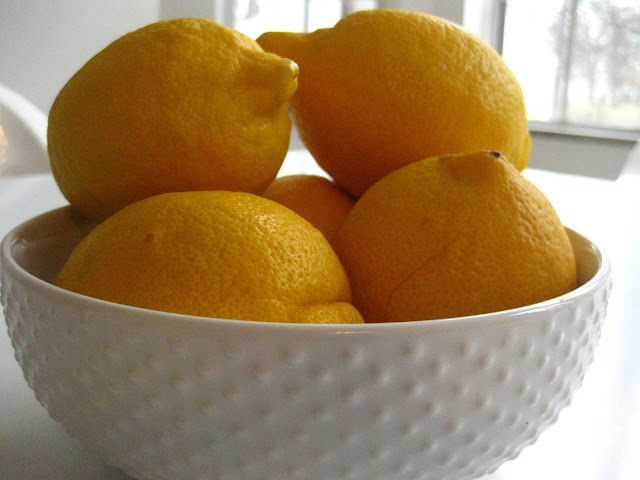 I must confess, though. We're not making just any ordinary, run-of-the-mill, hot-off-the-Internet limoncello recipe. We're making the recipe we got firsthand from my husband's family when we visited them in Alvignano, Italy six years ago. It's been passed down from generation to generation, and it's truly a great source of pride for them.

Making homemade limoncello is super easy. It's extra fun. And it's a uniquely satisfying experience.

It's also a real treat to serve after any special dinner -- including any of the ones in my book! :)

Keep your limoncello chilled year 'round in the freezer (the alcohol content will prevent it from freezing) so you'll be ready to pour it at any time. 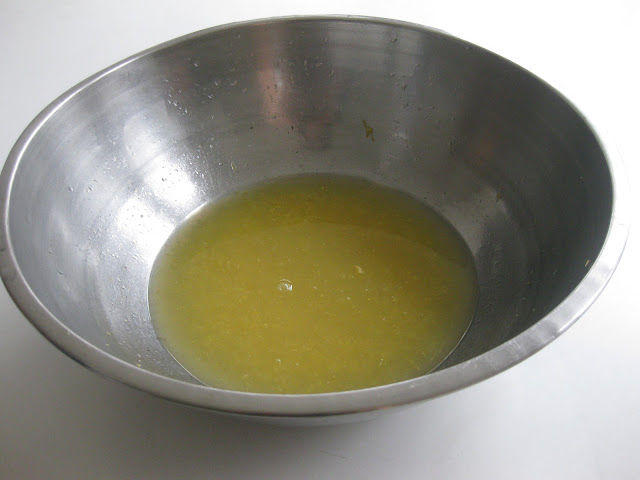 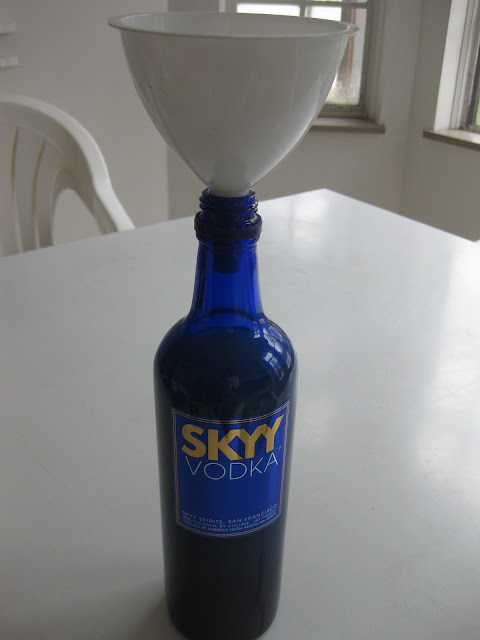 So, here you go, dear readers. If you're feeling ambitious and want to make a unique, one-of-a-kind, sure-to-be-appreciated gift for that very special someone (or even yourself!), try this original Italian recipe. Salute and cin cin!

Posted by Maria Isabella at 10:54 AM No comments:

Email ThisBlogThis!Share to TwitterShare to FacebookShare to Pinterest
Labels: limoncello

I had the great pleasure of giving a talk and cooking demonstration at Hudson Library last week.

My loyal and trusty assistant (and very lovely daughter), Andrea, was there to help me. We sliced. And diced. And prepped everything we needed to show the audience how to make 3 quick-and-easy appetizers from my book.

By the time I looked up, the room was packed -- and we were ready to get started! 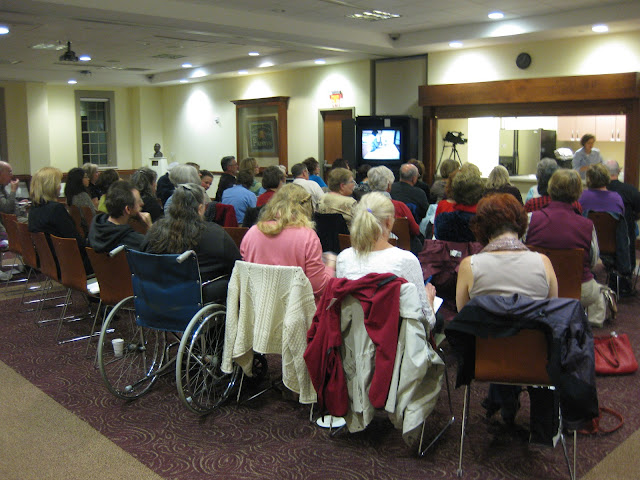 The first appetizer I demonstrated was Randal Johnson's Tuscan White Bean Dip. It literally took only 5 minutes to prepare. The audience blinked, and it was ready to be passed around with a variety of crackers.The oohs and ahhs were clearly audible.


Next, I got ready to demo Matt Fish's Goat Cheese-Stuffed Piquillo Peppers. 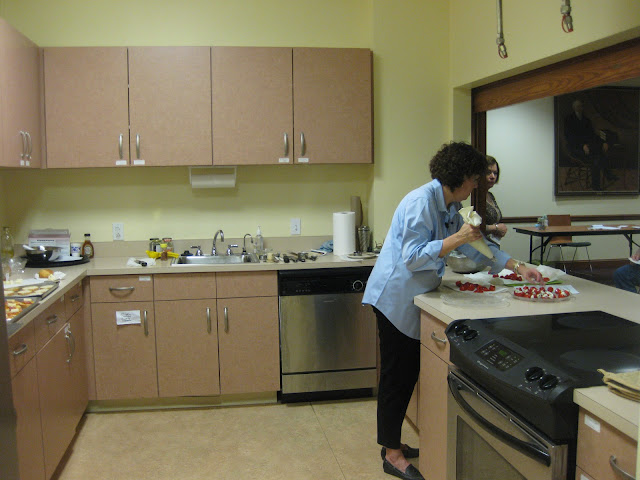 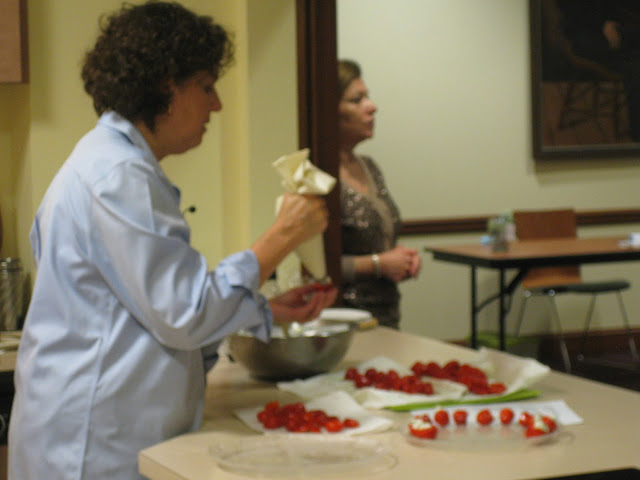 With its bright red, white, and green coloring, everyone thought this was the perfect appetizer to prepare for the upcoming holiday season. (Note, people were feverishly taking notes and jotting down the recipe! For proof, see next photo.) 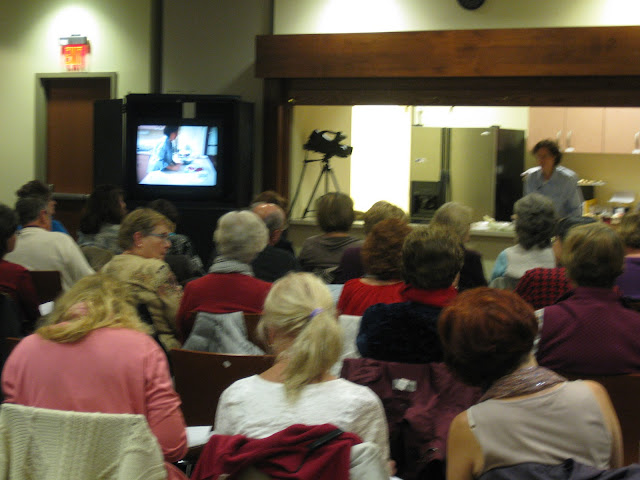 Last, but certainly not least, was Nolan Konkoski's Bacon, Brie, & Peach Toasts, which (in my humble opinion) was the hit of the night.


After a round of applause, I had a book signing that was fun, fun, fun. In fact, one very special lady asked if I would share some of my own family recipes on this blog. So, for you, kind lady, I am sharing one of my family's favorite appetizers. Hope you enjoy!

1. Preheat the oven to 350 degrees.
2. Combine and stir together all the ingredients except almonds in a bowl.
3. Grease a casserole dish (can use Pam spray). Fill with crab mixture. Sprinkle almonds evenly over top.
4. Bake for 15 minutes. Serve warm or at room temperature with crackers or bread.
Posted by Maria Isabella at 10:30 AM 2 comments:

There are many rewards in life. Finding the love of your life. Marrying him (or her). Having children. Having those children all turn out great (as in my case). And being able to realize your dreams. But there's one more added reward that I never sought...or anticipated...or expected. And that is, having my book on Amazon. 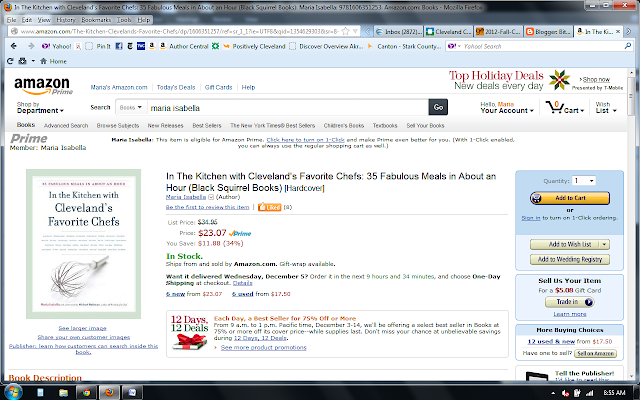 Now, you may think that's pretty petty. But Amazon is indeed pretty big. Pretty huge, actually. As in, they have over 8 million book titles. Eight MILLION! And right now (as of this minute), my book is ranked #18,593. (Did I mention that's out of 8 MILLION?)

Anyway, as happy as that makes me, there's just one thing missing: a reader review.

I love reader reviews. Since I've been shopping on Amazon (which has been quite a few years now), these reviews have helped me decide whether to buy a product or not. And I love reading what others have to say about their experience, whether it's about a toy, or a kitchen gadget, or a book.

Which brings me to my request.

If you've already bought my book...and if you've read it...and if you have an opinion about it, would you kindly leave a review on my Amazon page?

All you have to do is go to this page and write your heart out.

(Note: I would have loved to give out a prize for the first one penned, but that would have sounded suspiciously like a bribe. And that just wouldn't do.)

So feel free to write soon -- and I'll be posting some of those reviews right here in an upcoming post. Thanks, folks!

Posted by Maria Isabella at 9:35 AM No comments: