I'm utterly shameless. Because I'll be the first to admit my book makes a really great gift.

There, I said it. In print, nonetheless. For all to see.

But I'm not the only one who thinks so. Many, many people have told me the same thing. They're buying my book for Christmas gifts...for birthday gifts...for anniversary gifts...and for wedding gifts.

Speaking of wedding gifts, there was a lovely lady who approached Candice Berthold, owner of The Olive and The Grape. She wanted a very special gift basket made up of unique items to give to her nephew for his wedding.

But it couldn't be just any gift basket. It had to be a one-of-a-kind basket with things that no one else would give him.

Eureka!, thought Candice, who had just purchased a few cases of my book.

Candice put together an amazing arrangement of her specialty olive oils, balsamic vinegars, seasonings, condiments, pasta -- and an autographed copy of my book to the bride and groom.

The client was super delighted...and a wonderful idea was born!

Candice is now taking special orders for custom gift baskets that include my book.


Carmella Fragassi of La Campagna in Westlake is doing the same.

So if you're looking for that extra-special gift that tells your recipient they're really pretty special, think gift baskets. With my book. (Sorry, couldn't help that last shameless plug. I promise I'll stop now.)

I have the pleasure to promote my book in many different ways. Through book signings. Public talks. Round-table discussions. Broadcast interviews. Even private parties.

But one of the most rewarding ones is teaching a cooking class...which is exactly what I did last night at Solari's, a lovely boutique shop in Rocky River that carries the most beautiful ceramics imported directly from Italy. 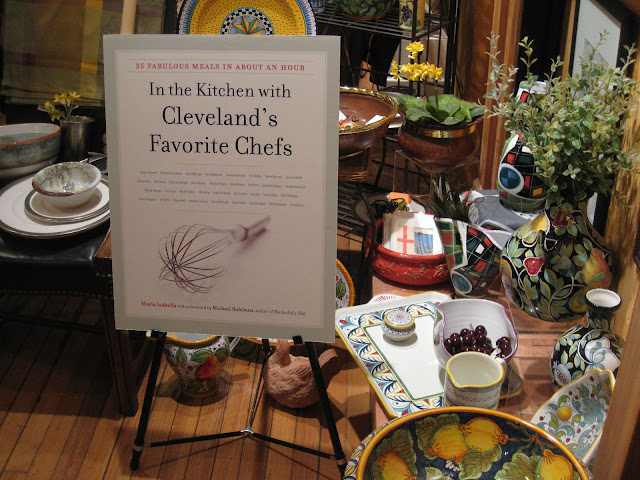 I got there an hour early. And with assistance from my willing sous chefs (aka my husband and daughter), I got set up and was rarin' to go in no time. 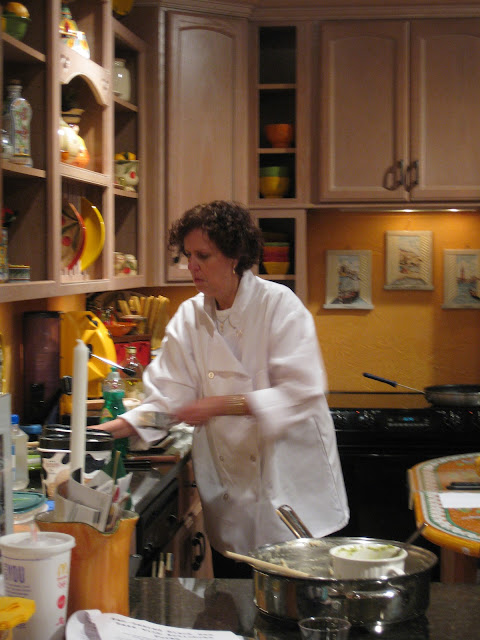 The class was sold out with 15 people attending. They trickled in a few at a time, but by 7pm, they were all in their seats and eager to get started. 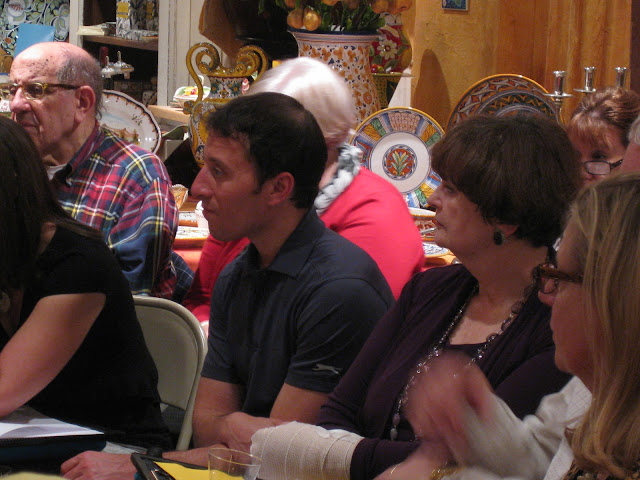 A more gracious bunch you couldn't find anywhere else. After I introduced myself, I told them a little bit about my book and how it all came out. Then the real fun began! 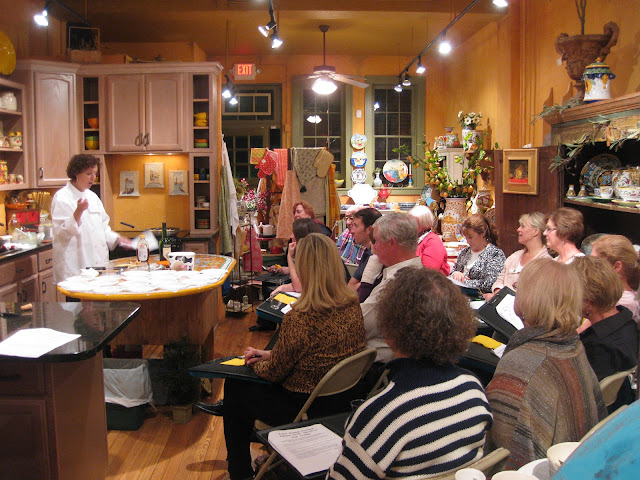 My menu was based on four Italian dishes from my book:

After chopping, and dicing, and slicing, and julienning (is that even a word?), and searing, and stirring, and reducing, and pouring... 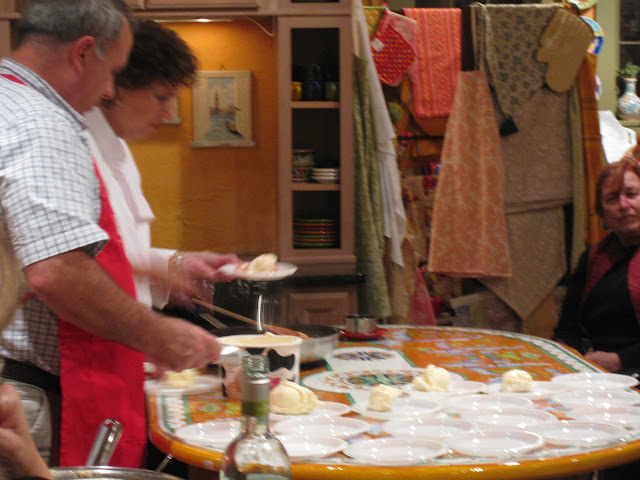 ...the dishes were demoed, prepped, and served -- to lots of oohs and ahhs. 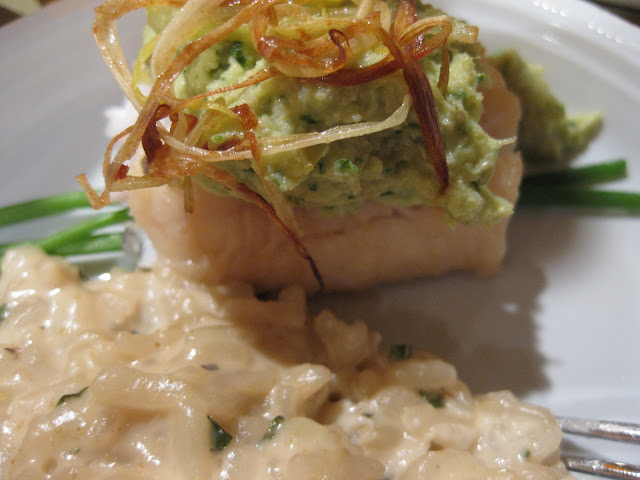 I think everyone -- but most of all me! -- enjoyed themselves very much.

Lucky me. I'm so glad I get to do these types of things. Here's to many more ahead. 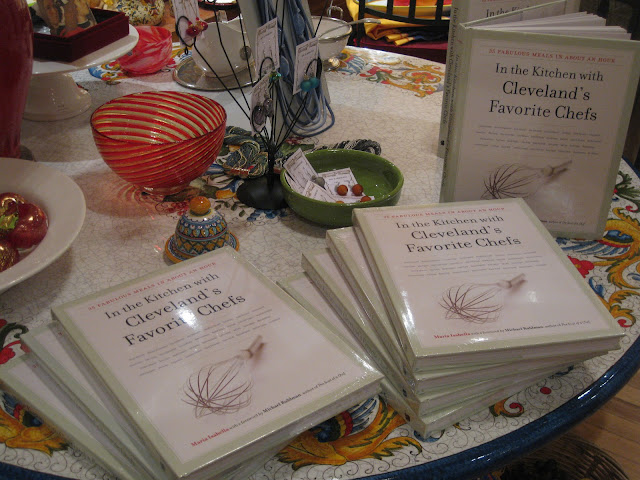 Not All Book Signings Are Created Equal

In my quest to arrange book signings, I have come across many venues. Bookstores, to be sure. Also libraries, book fairs, specialty boutique shops, restaurants, grocery stores, cooking schools, dinner parties, and food shows.

But perhaps one of the most unique venues of all was Rozi's Wine House in Lakewood.

Yesterday, I spent five hours signing books for those who attended Rozi's 17th Annual Wine & Beer Extravaganza. (And let me tell ya, it was surely more party than extravaganza!) 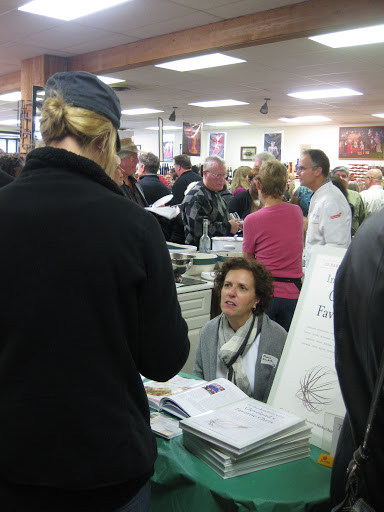 These weren't your ordinary book buyers either, mind you. These were fun-loving, wine-loving, and beer-loving people (all rolled into one) who have frequented this popular event for many years.

One of the chefs in my book, the uber-talented Jim Perko of the Cleveland Clinic Wellness Institute, was a featured attraction with his healthy samples of salad, salmon, scallops, and whole wheat pasta. What a blast we had, side-by-side, offering Rozi's customers something very enticing in two different ways: Jim -- his food, and me -- my book.

For all of you who attended and bought a book, thank you. I had a really great time and hope you did, too. 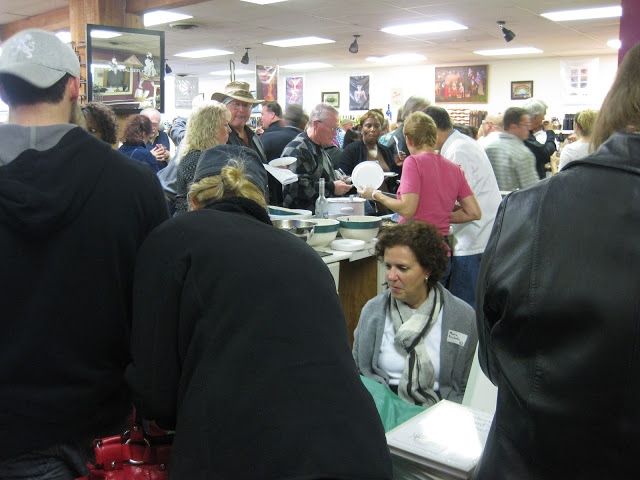 Either way, you'll have something to look forward to. Guaranteed.

Oh What a Night!

The place was Barnes & Noble in Crocker Park, Westlake. The time was 7pm.

First, Karen Small of the Flying Fig arrived with her delectable signature scones. (And for those of you fortunate enough to have tried them, now you can reproduce them yourselves. The recipe is in my book!)

Then Bobbie Werner, the community relations manager for Barnes & Noble and my good friend, set up the coffee. 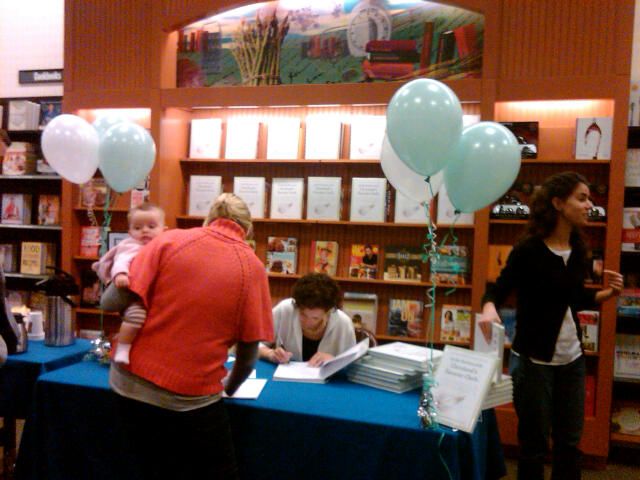 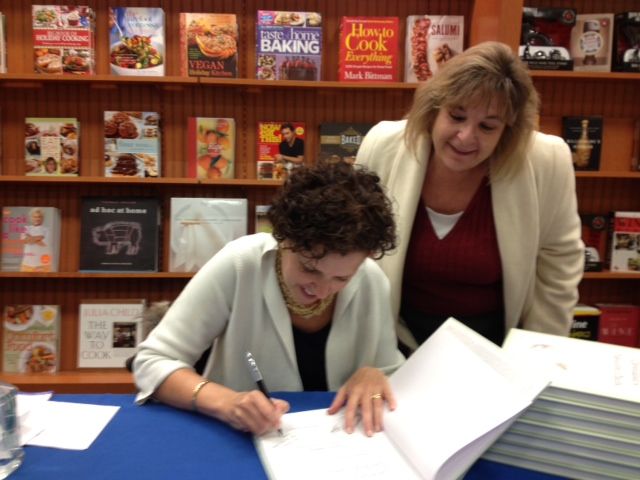 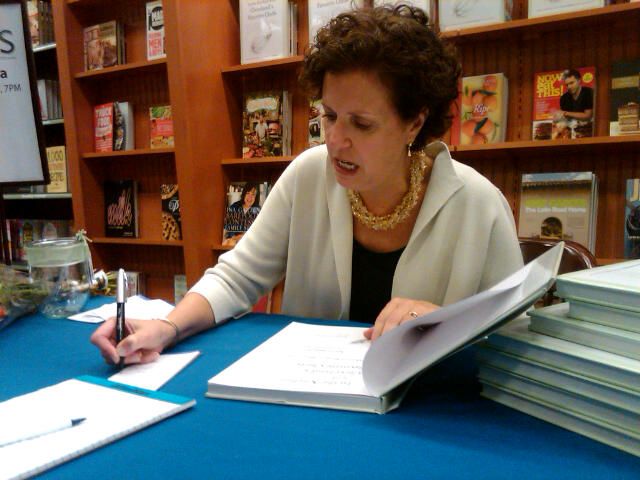 For those of you there that night, I apologize the line got so long. I really wanted to write meaningful inscriptions and let you all know just how grateful I was that you came.

The night ended. We packed up. We went home.

Then I slowly fell asleep -- with a smile on my face and much gratitude in my heart.

It was, indeed, quite a wonderful night.

In my old business, "GWP" used to be standard lingo we used all the time. It probably still is.

You see, before my kids were born, I was an assistant jewelry buyer for Higbee's (long before it morphed into the present-day Dillard's).

But back to GWP. For those of you who have no clue as to what I'm talking about, GWP simply stands for "Gift With Purchase" -- which is exactly what I'm giving away with every purchase of my new book!

Here's the story of how it all came about.

Even before my book was published, I knew I wanted a GWP. It would be my way of saying, "Thanks so much for being so kind."

But what would that "gift" be? I wanted it to be clever but also useful. It wasn't until the uber-talented Chris Brooks, designer for KSU Press, unveiled her design for my new book cover that I had my aha moment.

I finally found a sturdy mini whisk that people could actually use to whip up a couple eggs, stir a small batch of vinaigrette, or create some frothy cocoa. Very cute but also so. very. very. practical.

Four talented culinary pros (three of them featured chefs in my book) agreed to sponsor these whisks. I designed the gift tags. One side features the sponsoring chef. The other side features my blog address. You see, I want anyone and everyone who has a question, comment, or feedback about any of the recipes in my book to get in touch with me at any time.

Then my sweet twin daughters helped me cut, poke, twist, tie, and attach these tags with green-and-white-striped kitchen twine (that matches the green border on the book cover) to about 500 whisks. No fast task, let me tell ya!

Email ThisBlogThis!Share to TwitterShare to FacebookShare to Pinterest
Labels: gift with purchase

I just had my first book signing today. Boy was I nervous! But I was also so excited, too.

This afternoon, after Mass, I drove out to a quaint little shop, tucked away in Mentor, Ohio, called The Olive and The Grape. Candice Berthold, a fellow member of Les Dames d'Escoffier with me, owns it. She was gracious enough to invite me to participate in her "Fall Tasting Day" event, which is held every year.


The event started at 1:00. I got there right on the dot. People were already waiting in the parking lot! That's a pretty good sign, I thought to myself.

Then the doors opened. I was led to a room where the cooking demos were going to take place. I was given my own table. My own stack of books. And my own pen, ready to do some signing.

Oh, I almost forgot. I also had a bowl of Tuscan White Bean Dip next to me for people to sample. One of the chefs in my book -- Randal Johnson of Molinari's -- kindly volunteered to make this appetizer, which was one of his recipes in my book. His place is in Mentor, too. Not far from Candice's place.

People started arriving. Then "she" appeared. "She" was the first woman to buy my book -- actually, "she" bought two! And she was so enthusiastic about having me sign her copies that she made me feel like a million bucks. (Thank you, thank you, thank you whoever you are!)

Then another nice man came along with his friend (they each bought one). Then another woman. Then another. And another. Boy, was this fun! People were being so nice and so kind and so eager about the book that I began to think all the work I put into it was truly worth it.

Joe (my husband) also stopped by. As did several very dear friends, God bless them. It was almost like a mini party, and I was having the time of my life.

After three hours, the event died down, and I went home. It was truly a feel-good day. I'm happy. And now I'm going to sleep.

Thanks for listening, dear Diary.