There were a hundred ideas swirling through my head as to what to post this week. But since I had just highlighted Serbian soul food last week and since so many of you wrote to ask for a sample Serbian recipe, I thought this would be the perfect time to share a personal favorite with you.


It's a simple dish called koljivo (or also žito, which literally means wheat). Koljivo is a sweet boiled wheat dish used liturgically in the Orthodox tradition. 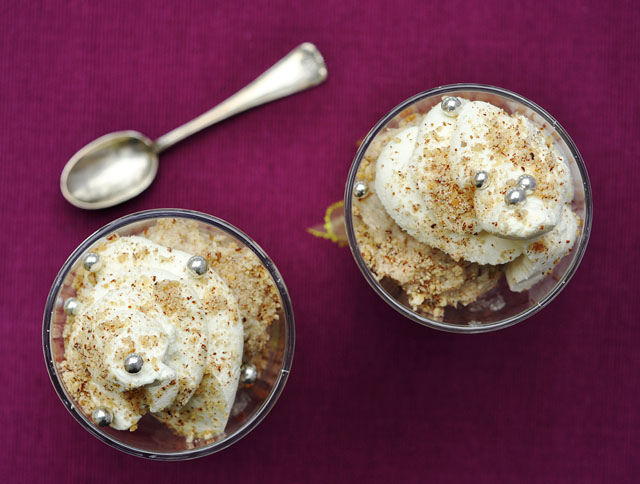 I have such fond memories of this dish as a little girl. It would be served every Christmas Eve after Orthodox Mass. It was also served after every parastos (a memorial service held 40 days after someone's passing), usually with a cross made of nuts decorated on top (see variations below). 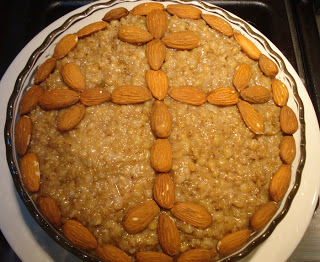 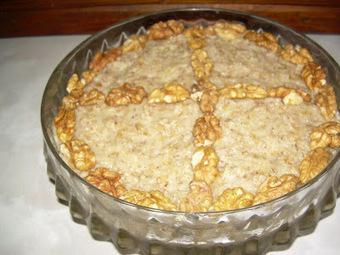 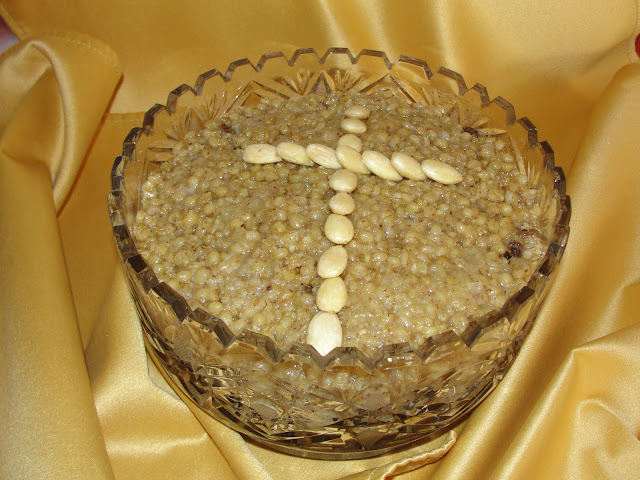 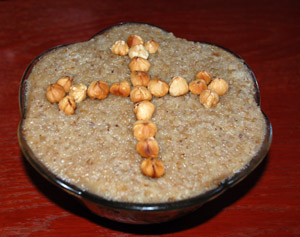 Church ladies would serve it in little cups...and I loved it so much, I was known to go back and sneak another cup...after cup...after cup! (Yes, that's my little secret. And now that I've made it public, I'm quite embarrassed!)

Then, about eight years ago, my husband and I were in Serbia visiting my relatives. We spent one day in its capital city, Belgrade, to visit an old Serbian friend of mine. At the time, he was living there as an Orthodox priest. (He's now a bishop in Australia.) But when we were teenagers, he was the president of our youth group and I was the vice president. In fact, he was my very first date. Imagine that! Anyway, back to my story.

"Mirko" (as I've always known him) treated Joe and me to a very chic, upscale restaurant in downtown Belgrade (see below). 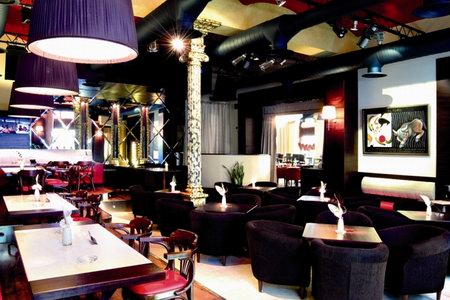 We had a fabulous meal and lots of laughs over old memories. For dessert, he ordered us all koljivo, which was served in a modern martini glass topped with fresh whipped cream. I hadn't thought of it in years, and suddenly, I was in heaven again! (Sometimes, the little girl in you never leaves.) 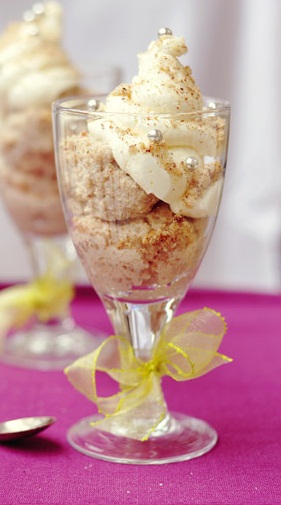 When I told Mirko how much I loved this dish, he told me it's actually very simple to make. I quickly jotted down his instructions on a napkin and made it as soon as I got back to the States. I still make his version to this very day -- and it's just as delicious as I always remembered it.

The main ingredient in this delicacy is wheatberry, which is the entire wheat kernel (except for the hull), composed of the bran, germ, and endosperm. You can find it at ethnic import stores, the West Side Market, health food stores, and finer grocery stores. Even Red Mill makes it. If you have a choice, buy the skinless kind. 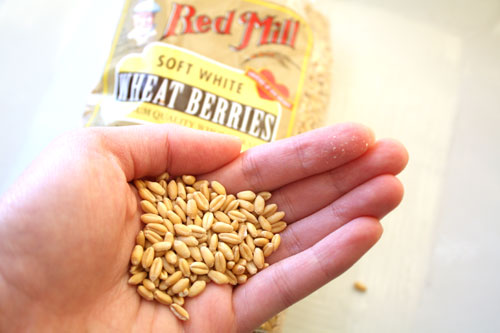 Even though it does take some time to soak these babies (you can do it the long way overnight, or the short way as described below), it is entirely worth it. Trust me.

Anyway, here is Mirko's recipe. I hope you enjoy it as much as I do. (FYI: This recipe makes quite a lot. If you simply want to make a little bit the first time, I would just make a quarter of the recipe.) 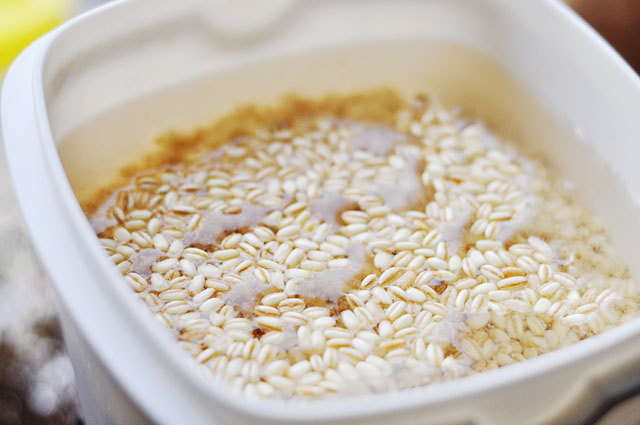 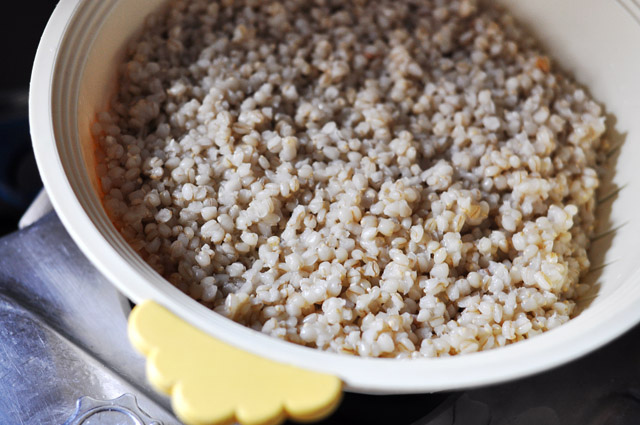 3. Mix together cooked wheat berries, sugar, and ground walnuts in a bowl. Stir in vanilla and nutmeg. 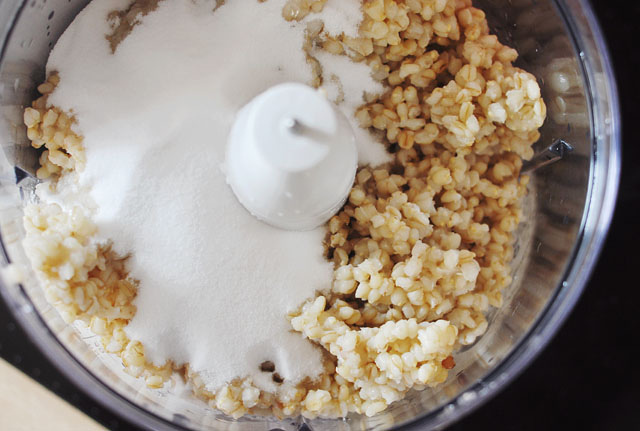 4. If you prefer a finer texture, place in a food processor (with the chopping blade) and pulse until desired texture is achieved.

5. If not serving immediately, refrigerate until ready to serve.

6. Add a dollop of sweetened whipped cream to each serving if desired.

7. As you can see from the photos below, you can also incorporate optional ingredients at the very end, such as freshly ground cinnamon, cooked apple chunks, dried cranberries, raisins, etc. 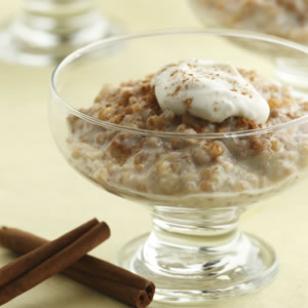 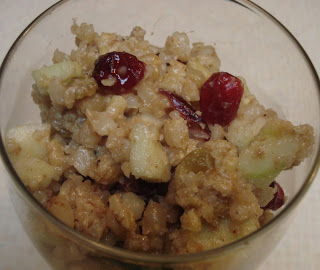 If there's a favorite ethnic recipe of your own that you've enjoyed over the years, I'd love to hear about it!

Until next time, happy eating!

Hope you get a chance to try it sometime. If you do, let me know what you think!

Look so good I am going to make tonight. Thanks for sharing!

What a huge hit! I mean a real home run! It's so hard to find a dessert that all four of the kids will like, let alone want more....and more....and more. I layered it with strawberries and whip cream and the textures together were great. I have to admit that while making Koljivo, I thought there was no way my picky eater Molly would like it in the least bit. Boy was I wrong. I even ate it this morning mixed with apples, cinnamon and chopped almonds. Thank you for introducing me to your Serbian favorite. Although there is no Serbian in our family, your recipe has been added to our "favorites".

Am thrilled beyond words! You just made my day.